Delhi Dynamos vs Chennaiyin FC, was supposed to be a very close encounter with the momentum clearly with the Chennai team due to an all win record so far. The All Win record did not last long as Delhi Dynamos notched up an impressive 4-1 victory over Chennaiyin FC at the Jawaharlal Nehru Stadium in Delhi. After drawing their opening two games Delhi were looking to get some momentum and improve on their finishing. Their game plan and efforts were fruitfully rewarded at the expense of the team from Chennai as the the “desi oranje” put no foot wrong, scoring some sublime goals in the process.

Wim Raymaekers scored the fastest goal in ISL, a record 33 seconds into the match!

Chennaiyin FC were in confident mood coming into the game, having been unbeaten and within touching distance of North East United in 2nd position in the league standings. Harm van Veldhoven had adopted a 4-3-3 for the game against Atletico at the Salt Lake Stadium and switched to a modified 4-4-2 for the remaining 20 minutes which allowed the Dynamos to be more compact in the center of midfield. The coach decided to start the game in the same fashion as he ended the last one, slotting the deadly trio of Steven Dias, Del Piero and Mads Junker in a strong lineup. The Dutch tactician had stressed the importance of winning the ball in midfield and the 4 man midfield was perhaps a ploy to do just that! The Dynamos literally set about correcting one statistic, that only one goal off the 22 total attempts on goal on their chin.

Within 33 seconds into the match Belgium defender Wim Raymaekers found the top corner with a powerful shot from outside the box! The move was started by veteran Del Piero’s short corner to Shylo Malswamtuluan, which was then squared to the Belgian center back, who hammered it in leaving the Chennaiyin goalkeeper Gennaro Bracigliano with no chance! The goal also won the tag of being the fastest goal scored in the ISL.

After the first goal, the home side dominated proceedings with Steven Dias, Del Piero and Mads Junker linking up superbly well with slick passing movement and tempo. The Chennai back line didn’t press enough leaving both Junker and Piero plenty to space to maneuver and play to their game plan.

For the visitors, Brazilian playmaker Elano looked particularly lively and caused Delhi some early problems as he found enough time to get a shot on goal after Anwar Ali’s miss hit  which Dynamo goalkeeper Kristof Van Hout saved very well! Indian striker Balwant Singh almost got Chennai level as he raced with the ball running at the Delhi defense and unleashed an effort from outside the box which was inches wide of Van Hout’s post. While Chennai did find some rhythm in attack, their defense had enough gaps to make it easy picking and Steven Dias did just that, as he played in a peach of a ball over the defense for the unmarked Mads Junker to comfortably head past the stranded Chennai goalkeeper. At 2-0, the Dynamos were finding it easy to play to their strengths and looked the far superior team in the opening half. 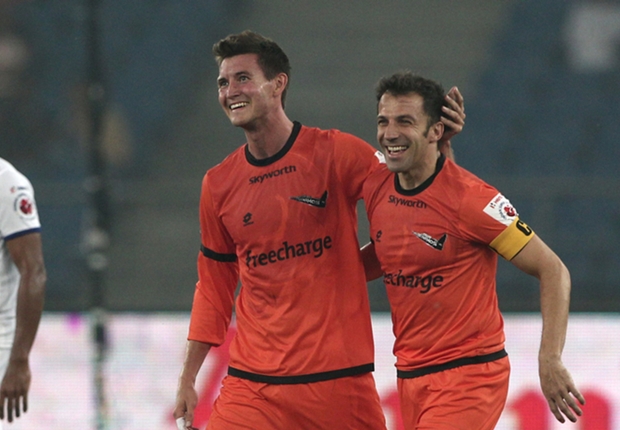 Mads Junker and Del Piero linked up well for the Dynamos!

Materazzi would be particularly disappointed with his defenders who were sloppy and exposed on far too many occasions. Mendy was moved to a more advanced role as former Manchester United player Bojan Djordjic dropped further deep to help shore up the defense and add some numbers at the back. Veldhoven moved Del Piero to a deeper midfield role after he started off partnering Danish Mads Junker upfront. Chennaiyin wanted to have a go at Dynamos as striker Mendoza and Jayesh Rane were brought on to play with 3 men upfront instead of 2. The chances however were more forthcoming for the Delhi Dynamos as Steven Dias saw his shot parried by Bracigliano straight into the path of  the arriving Junker who crossed in for Raymaekers only to see his header go wide. Junker couldn’t capitalize  and add to his tally after Dhanachandra lost the ball with wrongly skewed pass. It was a joy to watch for the Delhi fans as they cheered every completed pass from the boots of the men in orange. Bruno Herrero and Steven Dias were neat with their distribution and were a constant threat as the Dynamos looked to add to their tally.

Chennai did get a few chances on the counter attack with substitute Mendoza almost grabbing one back in the 62nd minute only for the Delhi goalkeeper Van Hout to make a brilliant save and keep his side’s two goal lead firmly intact. Del Piero then found Shylo with a beautiful through ball only for for the winger to scuff his shot wide! Chennai did manage to get a goal back with Elano scoring a from a cracking freekick as he directed the ball over the wall and oversaw it swerving away from the diving Delhi goalkeeper. Just when a few nerves started to show among the fans, Harmanjot Kahbra crashed into the back of Shylo inside the area with the referee having no choice but to award the Dynamos a penalty. Bruno Herrero converted the resulting penalty, driving it across the right of the stretching hands of Bracigliano. The goal came at a decisive moment with only 10 minutes of the half remaining, Delhi could sense they were inching closer to their first victory. As Delhi looked to close the game down substitute Gustavo Marmentin piled more misery on the poor Chennai defense as he dribbled his way past them to add a fourth in stoppage time.

Delhi Dynamos would hope this is a first of many Celebration Dances !

The high scoring game finally came to an end, with a flurry of goals for the Delhi Dynamos lifting them to 4th position in the league standings. Harm van Veldhoven would be pleased with his side’s effort as they finally got the goals that they very much required after a dry run in their first two matches. Are the Dynamos stepping towards their deadly pre-season form, or was it just a case of a poor Chennaiyin defense. The fully packed house at the JLN would certainly hope it is the former. They would also hope to see their favorite Alessandro Del Piero get on the scoresheet!

More From The Author